We had another midnight train, so we already expected we would’ve a terrible sleep. We were right.
Although the train was a lot less shaky compared to the previous one, the beds were still made for dwarfs.
At 03:00 we arrived in Guntur and headed towards our hotel for the next two days to get some rest.

We awoke around 11:00, and since we already missed the hotel breakfast we decide to head out into Guntur to check whether we could fine somewhere to eat.
While it was hot in Gangawati, Guntur was even worse. It was 37 degrees and quite humid which made it really stuffy. We had looked up a few placed on our mobile app, but unfortunately all these places were currently closed, so at 12:00 we headed back to the hotel restaurant to get some lunch.

The menu was quite diverse, but we soon spotted several dishes with the suffix “65”, so we ordered Baby Corn 65 and Panneer 65. We were quite happy with our decision.
When we were finished with our lunch we got a call from the bride and groom that they would be coming over soon, so we left the restaurant to freshen up a bit. When they arrived they first wanted to have some lunch, so again we went into the hotel restaurant.
Since we just ate we only ordered some small startes, while the others were eating away. I think during our stay in Guntur we only ate vegetarian, which was unexpectedly good. (Although we doubt we could ever make a vegetarian dish this tasty ourselves)

After our second lunch we headed towards Pandithapuram, where the second reception would take place. The decorations were a bit different compared to the wedding and first reception. There were LED signs everywhere of several gods and the stage itself was also covered with flashing lights and the color silver was quite present. Although it was well done, we personally liked the atmosphere of the first reception more.

Apparently Pandithapuram also doesn’t get a lot of foreigners, since we were surrounded by children who wanted to take selfies or wanted to show off their English skills. Luckily for Rhonja her friend Asa was also at this reception and she was taken away to get dressed. Of course she couldn’t wear one of her two brand new sarees she now owned,the bride arranged another one for her, this time in pink: 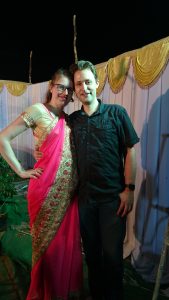 (Yeah, Marcel looks a really tired in this picture. The last night-train didn’t do him any good)

Aside from the location and decoration, the reception was a lot like the previous one.
This time however, the groom arranged to be blessed with petals instead of rice (so he wouldn’t have to wash out all the rice out of his hair for three days). They did have bowls with petals ready, but apparently some of the arrangers still found the need to add rice to the bowls. Seeing some people thought rice was the true tradition the bride and groom unfortunately still got several kilo’s of rice thrown at them.

Of course we were the chosen ones to have dinner together with the bride and groom. Since we were in the part of India where they grow red chili peppers, dinner was a bit more spicy, but nothing extreme. By this time we already went for the Indian standards of spicy wherever we ate, since we could handle their “less-spicy” fairly easily.

Since it was already getting fairly late, after dinner we arranged  with the bride and groom that tomorrow we would do some shopping together and  we headed back to the hotel in Guntur.