Today we got up early to get to the reception.
Marcel was already dressed (as in jeans with a shirt, which is the regular attire for a reception it seems) but Rhonja would be changed into her saree at the reception, since she wasn’t able yet to get it on by herself.

We started with some breakfast, which unsurprisingly was a lot like the dinner we had the night before. Still tasted really good, although having a warm curry for breakfast is still something getting used to.

Rhonja got called away by several ladies to get her changed. She was bit surprised when she found out the bride arrange a new saree for her.
They also had some matching bangles for the outfit, but since Rhonja already tried India’s largest bangle size in Tirumala she already knew they wouldn’t fit. However, this didn’t stop them. Somehow they managed to mangle Rhonja’s hand and get 12 bangles on her arm.

All set it was time for the reception. Again we got some seats in front of the podium so we wouldn’t miss anything. The reception was a bit like the traditions we’d seen in Tirumala, people got on the stage, filled their hands with rice which they then sprinkled on top of the bride and grooms head.
I remember talking about this tradition with the groom after the wedding ceremony and he kinda disliked this whole “wasting” of rice. If you looked closely you could see this in his expressions every time people threw rice at them. (We agreed with them. Although it’s part of their traditions, it’s still kinda weird kilo’s of rice are wasted)

Now, at the wedding ceremony the rice sprinkling as done by maybe 80 people.
This time, around 1200 people came to give their blessing, resulting in a podium filled with rice.

After we gave our blessings, we were given even better seats: On the podium next to the bride and groom: 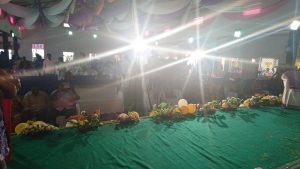 It was a bit uncomfortable for us, since it wasn’t our aim to be in the spotlight, so after a few minutes we went back to our places in front of the stage.

The reception ended somewhere in the afternoon, after which we were taken to some paddy fields nearby. They were doing a photoshoot here and the location was perfect since the sun was just about to set.
When the photographers decided 500 pictures were enough we went to the house of the groom’s parents, where we had dinner.
Afterwards we were brought back to our hotel to get some sleep.

The next morning we had breakfast at the hotel. Unfortunately a lot of meals weren’t available, so we settled with several Masala Dosa’s: 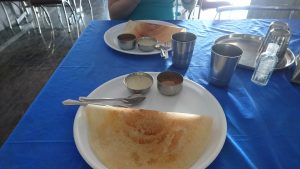 Afterwards we walked around Gangawati for a bit, but seeing it was around 35 degrees we headed back to the hotel after a while to get some beers.  We were told we would be picked up at 14:00, so we went back to our room to pack up a bit and get some rest.

Suddenly someone knocked on our door. There was a waiter with a glass of Lasi (which is a bit of a yoghurt milkshake) and he also had the receipt.
We didn’t order anything, but I remembered Rhonja still wanted to try it, so I accepted it and paid the waiter.
The waiter however didn’t leave our room. He didn’t say a word but he kept standing in our room, so we were getting a bit uncomfortable. Since he didn’t spoke we figured he probably wanted us to check out. While we were packing up our final stuff, the groom called me and asked me if I could check whether another friend was in his room, so I left ours to check and immediately the waiter also left the room (it seems completely plausible he was scared of Rhonja). I checked on our friend and quickly went back into our room and closed the door, thus getting rid of the waiter.

We now could pack everything up slightly less awkward without the waiter watching everything, but after several minutes the waiter knocked on the door again. Luckily we were now done and headed down to the lobby to wait for our ride.
It was now 14:00 so according to Dutch standards we were perfectly on time.
In India however they use a different time format it seems, 14:00 isn’t at 14:00. It’s more somewhere between 14:30-16:00. So of course our ride came at 16:00.

We were now underway to the railway-station againfor another night-train, this time to get to the place of the next reception: Guntur.