Current we’re staying at the same place as where the wedding will take place.
Compared to our previous hotels, things are… a bit different.

– The room itself is quite spacious, but we only have one light bulb and a fluorescent lamp.
– We do have our own bathroom, but the toilet doesn’t have any paper (luckily we were prepared for this and brought our own!).
– We also have airconditioning, but outside our window is a loud speaker which plays Hindu chants 24/7. (earplugs only partially solve this problem)
– If we leave the room we’ll have to lock it using this big padlock.
– Our blanket for the night is a fleece blanket which is not as wide as the bed. Luckily we have two since there are two beds, king and queen sized.

Today the wedding started which would be entirely on the roof.
We started with breakfast there with my colleague (the groom) and afterwards several ceremonies started.

The groom was partnered with his sisters son, and they were “bonded” together with a ritual on which they both had their nails and feet painted. Afterwards everybody took a bit of rice, and sprinkled it on both their heads while making a blessing. As a thank you we got two small bananas, a leaf and some nuts.
This process took about an hour.

Now it was time for the bride to undergo this same process. The groom wasn’t allowed to see his bride just yet, so he carefully had to leave the place the other way around so they wouldn’t bump into each other. So also with the bride we gave her our blessing while putting rice on her head and getting bananas in return. Right now the ground was beginning to be covered with rice.

We then had a delicious lunch. We sat at a table and got a huge banana leaf in front of us. First we had to wash it with some water, and afterwards waiters came and filled it with a lot good stuff.
We were told that one of the purposes of the banana leaf was, that when spoiled food comes into contact with the leaf it’ll turn black. I have no idea what exactly was on there, but it was either really really sweet, rice mixed with yoghurt or really spicy stuff.

It was around 6 that both Rhonja and I were going to get dressed. The bride and groom got us traditional Indian clothes to wear during the wedding: 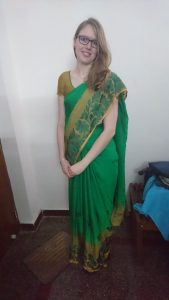 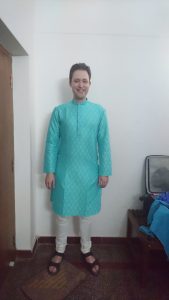 Around 19:00 the big part started, both bride and groom were sitting on the stage and two people were holding some kind of curtain between them so they couldn’t see each other yet. Eventually they removed the curtain and we got to put rice on their heads again with a blessing.

I’m not sure what exactly happened after that, unfortunately most of the time photographers were a bit in the way. There were some games between the newlyweds to get to know each other in a playful way, which involved more rice on heads but also glitter and tiny colorful balls. But in total I think we threw rice with blessing about 5 times today.

After 4 hours of ceremony Rhonja and I decided to have a bit to eat.

Unfortunately I can’t really explain what exactly went on today, perhaps we’ll get some clarification on that in the next few days. But for us the highlights :
– very intriguing wedding. Although we didn’t fully understand it, it was completely different compared to Dutch weddings
– the atmosphere was really relaxed. Only a few people at the wedding knew how everything should go. Everybody else just went with it and were pointed in the right ways.
– the clothes we got to wear were great. We thought they were comfortable and really beautiful.
– on that topic, it was also great to see what saree the bride was wearing, she had three different ones throughout the day.

Rhonja made friends with Asha during the day. So after dinner (around midnight already) she came to our room to give Rhonja some mehndi (henna tattoo). Though we had a little trouble sometimes understanding her accent it was very gezellig. Rhonja now has more traditional patterns on her right arm, excluding the heart with Marcels name in it, and on her left she asked for a smaller, more modern tattoo-like style to match with what Asha had herself.
It was around 01:30 we went to bed, exhausted after a very exciting day.

One thought on “The wedding part 1/3”