The day after the wedding we did some sightseeing in Tirumala. A driver was arranged for us and we visited several places.
First we went to a temple, the path leading up there was filled with cute little stores. We were a bit surprised by all the attention we got.

During out trip we got used to being stared at. Some people literally stop walking and stare and keep staring even after you’ve passed them.
Here it was a bit more extremely. Although Tirumala is the richest and busiest holy spots of the world, it seems being a foreigner is still a bit special there. It started with a small family asking us to take a selfie with them. Of course just posing wasn’t enough, Rhonja had to hold their baby for the picture as well. After taking half an hour we finally made it to the temple. The temple was only 50 meters away but the amount of selfies that were taken was unbelievable.

The temple itself was beautiful. We had to take our shoes of to get inside. There was a man slinging some fire and blessing people, but as soon as it was our turn he held the fire away from us and yelled something. It seemed we wouldn’t get blessed here. We did get a red/yellow string tied  to our wrist, so at least we got something.

After this we went to a waterfall, which looked great. If you took off your shoes, went through the water and touched a certain stone, you would be blessed for life. We didn’t proceed with this though. There was an unbelievable amount of garbage in the water. This is something you’ll encounter all over India. They have really beautiful places, but you’ll also encounter garbage wherever you go. So out of health reasons (Marcel had a small wound on his toe when he dropped a chair on it) we decided to stay out the water.

Lastly we went to the Papavinasam Theertham which is a holy stream. You can take showers here and they say that it’ll get rid of all your sins and evil.
Unfortunately we’re probably still full of those, since we skipped the actual showering part.

Now it was time to get to our next destination. In our case that was near Hampi, which is about an hour away from where the reception would be.

It was easiest to get there by train which still took from 21:00 to 05:45. As you can guess this was a night train, so beds were booked for us.
We heard plenty of horror stories like waking up and having a passenger sitting on the end of your bed, or needing to secure your luggage with a chain. Combine that with India being a bit grimy and we were feeling a little anxious about the whole thing.

But Laxmi assured us everything would be fine. And yes there is even a western style toilet on board. So we get on the train and it’s indeed an outdated old train. But it appeared to be clean through all the wear and tear. Our seats were located and we got pizza from domino’s on board for our dinner.
You had to make your own bed with the bedding provided and it was short and strange but clean.
Before bedtime we decided to use the bathroom though… That was once and never again. It looked “clean” as in there was no puddle on the floor or anything, but the stench was terrible.

The night itself was not as terrible as we thought it’d be but still pretty bad. Rhonja sleeps in any location, even here, but even she didn’t feel very rested after.

The place we were staying at was a relief though. We ended up at Mowgli Resort and were greeted around 6am by a friendly employee who informed us only one of our cottages was already ready, the other would be around 10am.

The wait was relaxed though. They had a lounge area with a fantastic view over the rice paddies and they served black coffee!!
Though we planned to sleep some at 10am we couldn’t miss this opportunity. It was amazing after the way they usually serve it, with loads of milk and sugar there’s not much left to call coffee.

When the room became available to us Marcel opted to sleep some while Rhonja packed a bag to relax outside. She saw some pretty bugs though and spent the afternoon trying to take a nice picture.

Though the resort was a welcome relief after the previous night we soon realized this wasn’t much like India. It was very western oriented with their menu, and judging by the other guests it attracted a lot of hippies . Thr waiter advised us to head down to the river to take some nice “snaps” 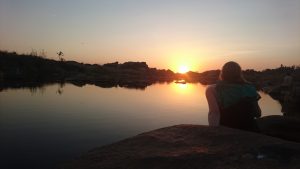 We enjoyed a beautiful sunset down by the river but the next morning we were discussing asking Laxmi if it was possible for us to stay a little closer to them.
We also learned from an employee that he was called out of bed by his boss to prepare rooms when we were arriving at 6am the previous day. Apparently we were special guests and had to be treated nicely. From what we understood apparently Laxmi has connections to the owner of the resort.
We were VIPs it seems!

That day though we had a guided tour through the ruins of Hampi. Once a kingdom rich in culture and wealth. Now a pile of rubble, looted from all its riches.
The guide was very nice, but he repeated stuff a lot:
“These are 65 musical pillars. If you tap on them they will make beautiful sound. They were made to make music because this is the dancing hall. They made the music by tapping musical pillars which make sounds, there are 65 of them. They were placed in the dancing hall so people could make music. The music was made by musical pillars, which make a sound when you tap on them. In total there are 65 musical pillars here”

That was just a short part of his story. He made sure we at least heard about the musical pillars at least a hundred times.
(After some googling we even found out he was wrong, there are only 56 pillars)

Enduring the heat (37°C) we were shown several great places in Hampi. There were palaces, bathhouses and marketplaces. Unfortunately only the stone bases of these buildings was just left. The actual buildings were destroyed in raids some time ago.

Due to the heat and the fact most we saw were just stone bases, we asked our guide to bring us to the best remaining place after which we’d like to call it quits. We ended up at some impressive monolithic statues of some Hindu gods. A statue of Vishnu was 6m tall. It was very impressive and surrounded by a wall with beautiful trees outside it, where we saw a whole bunch of monkeys!
A few meters away was a statue of Shiva. Or rather it was a small stone building that didn’t look very special, but inside was the monolith. Rather than a humanoid figure though, we saw a cylindrical shape with a protruding part. It was standing in water. We were told this is how they also depict Shiva, the destroyer.
After that we took a short drive to see the monolith of Ganesh from where we had a great view of our surroundings and we could even see the temples we saw from down by the river last evening.

The temples were really nice to see. If you wanted to go further inside though you had to leave your shoes. Let me tell you those stones get hot in the sun! We mostly stuck to the shadows unlike some Indian people who walked across the huge square like it was nothing.
It’s strange though how you’re led along a path where a bunch of priests call you over for various blessings that they do expect you to donate for afterwards.
Marcel got himself a blessing in the form of a dot on his forehead.

At the end though we got to meet Laxmi the temple elephant! 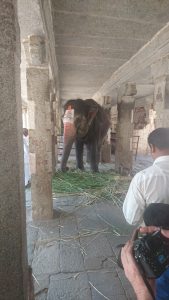 She was being fed at the moment and you could get really close to her if you wanted to. If you held out some money she would hold out her trunk so you can put it inside, after which she would hand it to her handler and bless you by gently patting your head with her trunk!
Needless to say, Rhonja went and got blessed by an elephant. She remarks their trunks are really soft.

Though we could also visit the modern town of Hampi right next to the temples, we opted for a late lunch at the resort and some delicious cold beer.

We were playing some games and drinking beer. We hadn’t heard from Laxmi the human since we asked about our accommodations. We didn’t even know for how many nights the resort was booked, so we had thought we’d be staying another night when it was getting dark.

And that’s when our talkative employee came to our table! “I’m so sorry but I was just told you are leaving. Did you pack your bags yet? The taxi arrives in 30 minutes.”

Luckily our bags were mostly packed already. We finished our game and went outside with our bags to wait for our ride to the next destination.
Complete in style with us having no idea where we were heading off to next!