This morning we got up at 05:15 to get a shower, pack our suitcases and be on time for our ride to Bangalore airport.

We got to the hotel reception, the guy behind the counter reminded me that I still had to pay. While he was printing my receipt I asked him “The cab will show up soon? It’s almost 6am”
“Uhm, sorry sir. I know nothing”

Great! While I was already stressing whether the cab would make it in time to the airport because of traffic, there apparently was no cab at all to take us.

Luckily the reception called a cab for real this time, and after a 20 minute delay we were heading towards the airport.
Unfortunately our troubles weren’t over yet. Halfway we came to a halt because of traffic. Some guy rammed his car into the railing and this caused our three lanes to come to a complete stop.
People started to figure out how to get around it (some where even making a 180 degree turn and headed back, on a highway…) but fortunately for us our cab driver could continue after a few minutes.

Arriving at the airport we had little trouble finding the check in counter of our airline. We knew that our check-in luggage had a maximum of 15kg (as opposed to 23kg with the international flight to India) so the night before we stuffed our hand luggage cases to make sure our big suitcases would be allowed.
(otherwise we would have to pay a whoppin’ €1,50 per extra kilo)

Our two big suitcases were weighted, and it was exactly 30kg!
“Now put on your hand luggage sir”
Whoops, this was the first time someone actually weighted our hand luggage.
Now we were exceeding the weight by 11kg.
“You’ll have to pay extra charges sir”
“Fine, I’ll pay”
“Just a minute sir”
She called somebody, and when she hung up she suddenly told out it was alright and we could proceed. (No idea why she did that)
She did tell us our hand luggage was too big and had to be stored on a special place on the plane during the boarding process.
When boarding our 2 propeller plane, our handluggage was indeed taken from us but we were given a receipt.

After one hour of flying we arrived at Kochi Airport. We got our luggage (no idea why we were given a receipt for the handluggage, since we just took it without showing it to anyone) and headed outside where Shakeer, our driver for the coming three days, was waiting for us. Next stop was Munnar, which is up in the hills.

Shakeer is not a man of many words, he is more like the silent protagonist you see in videogames. It looks like he takes his work very seriously. When you ask him something, most of the time he won’t even respond, that’s how committed he is to being our driver.
Jokes aside, he knows how to drive.
The roads to our next destination, Munnar, seem like they aren’t even finished, yet Shakeer manages them with ease.

Before every corner he makes sure that everyone is aware of his presence, of course making use of the horn. Turns were really sharp, and people tend to take over in turns with low visibility.
After 3 hours, of which Rhonja and I mainly tried to sleep since it was mentally better to keep your eyes closed, we arrived at our Hotel, the Munnar Tea Country Resort.

Before we were able to open the car doors, they were already opened by the staff. We were really surprised by their kindness. At the previous hotel it was only directed to me. While they kept always carried my suitcase for me, Rhonja had to drag hers along herself.
But here it was different. When we got out of the cab we were instantly greeted by 4 people, one of which gave us a flower necklace and another gave us a bindi on our forehead (a dot).
We got freshly made juice and all of our luggage was carried to our “villa”.

We thanked them for the great reception and decided to freshen up in our room.
It’s quite different than our previous room. There’s a lot of space and also a refrigerator.
We now have a balcony with a great view: 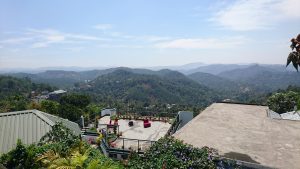 When we checked the menu we had in our room, we noticed all drinks were non-alcoholic. After some quick online searching we found out that in this area almost no one has a license to sell booze, with the exception of a little government run store in Munnar. We found our first target.

We went to the hotel reception, who in turn called our cab driver to come pick us up.
We have no idea where Shakeer is staying all this time, but he’s always available within 10 minutes. (we would ask, but we know it’ll remain unanswered)

After a 20 min drive we arrived at Munnar. We did some more shopping there, and also found the place where they had booze. It was a really shady small shack, with an extremely narrow entrance. It kinda felt like you were buying drugs in a dark alley, everybody there looked at me with a face like ‘what are YOU doing here?! ”
Inside I arrived at the first barred windows where I had to tell a guy what I wanted and pay him. Then I shuffled sideways to the next barred window, where a guy got me my goods.
Since they didn’t have any beers we settled with a red wine called Dia.

Our mission was successful, so we headed back to Shakeer for a clean getaway.
Shakeer didn’t tell us, but he thought we should see more today, so he first dropped us of at a Hydel park. He did mumble something about waterfalls, but those were nowhere to be found.
The park itself was pretty nice though, it was relaxing to be away from all the car fumes and loud honking for a bit.

Afterwards we headed back to our hotel, but underway made a few stops to make some great pictures of our surroundings.

Back at the hotel we had to wait a bit for the restaurant to open, we forgot they weren’t open untill 19:30.
We had a great dinner, we started with some regional dishes, consisting of fried chicken which tasted amazing and was super crispy. As main course we also stuck to the Kerala Region. Rhonja went for fish (in a tomato heavy sauce) but I stuck with chicken. Both were fine choices! Unfortunately I can’t tell much about the differences in chicken dishes we had. They were all differently spiced and also tasted differently (in a good way) but I don’t have a clue how to describe it. Just try it when you’re here!

For dessert we both choose a carrot pudding called Gajar ka Halwa. Again delicious, aside from all the cashews that were in it but Rhonja was glad to help me out with those.

Right now we’re getting ready for bed. Tomorrow we’ll be up at 06:00 to do some Tea plantation tracking and see the sunrise!

One thought on “Arriving in Munnar like a king”