Yesterday morning we got up and first had some breakfast at the hotel.
When it was almost 8am we packed up our bags and headed to the reception to get our driver.
Before we could leave they asked us if we could give a short video review of our stay, so that’s probably going to be online sometime soon.

Shakeer then took us back to Kochi Airport, which was a three hour drive.
Things got a little sketchy when we arrived at the airport. Shakeer handed me and empty receipt to sign. I told him that nothing was filled in yet (there were areas where the amount of rupees would be written down) so I wouldn’t sign it.
He tried to convince me it would be okay, but after I refused a second time he said he would handle it. (luckily they don’t have any credit card info or something from me, so no worries)

Kochi Airport went kinda smooth. Both our check-in bags were weighted, mine was 1,5kg too heavy but apparently no problem for them. The same with our hand luggage which also was several kilos overweight.
Although our luggage was scanned at security, water bottles weren’t an issue and could be taken through security without any problems (saved us 20 cents for a bottle of water!)

WiFi was a bit of a problem though. I still needed to have the info on our next location, but halfway through my conversation with my colleague the Internet went down and we had no idea where we would be heading.

Luckily the WiFi on our arrival airport Chennai was a bit better, and we found out that a cousin of my colleague was already waiting to pick us up. He also arranged a hotel for us and brought us there.

The hotel wasn’t quite what we expected, it was way more luxurious than our previous stays. We even had a swimming pool: 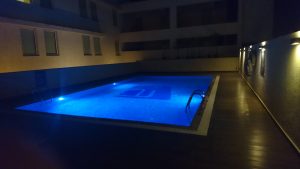 But best of all, they served beer here! Also nice was that they had fast speed wifi, which unfortunately broke down 2 hours after we arrived :-/
We spend most of the time at the hotel here to relax a bit after the previous busy days. We drank some beer, had a swim, ate some food with some beers, and drank some more beers. During dinner we even got to hear the life story of one of the waiters (who came from Kashmir) and another waiter helped us pick out a decent meal so we wouldn’t have ordered a weird combination of Indian foods. Afterwards we went to bed in our oversized soft bed.

The next morning we met up with my colleague’s cousin again and he got us a cab that would bring us to our next stop: Tirumala. He also got us an Indian simcard with data, which would make the whole trip a lot easier, especially since a stable WiFi connection here is almost non existing.
During the 3 hour trip our driver stopped at the side of the road to get some snacks, it looked a bit like celery but is was actually a kind of cucumber: 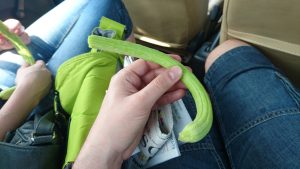 Before we could enter Tirumala we had to go through a security check. Just like an airport check our luggage and bodies were scanned. I think the main reason for this is that alcohol is strictly forbidden in Tirumala and they want to be sure we didn’t take any with us.

After the security check it was still a 30 min drive uphill, but afterwards we finally arrived at the hotel (even had to help the cab driver a bit with directions) and met up with my colleague.

We went out for dinner and again it was really good! We had several “65” dishes, which are prepared in the same way as Chicken 65 so we knew they would be good. We had a cauliflower and mushroom variant of that, which both also had battered/fried peppers hidden on the plate, so sometimes you accidentally grabbed a pepper resulting in drinking lots of water. We also had our first Dosa, which is a bit like a filled crispy pancake which you dip in two different curries. Quite difficult to eat properly, since you have to use your right hand, but very tasty!

Tomorrow we’ll be attending the wedding, really curious how that will be!